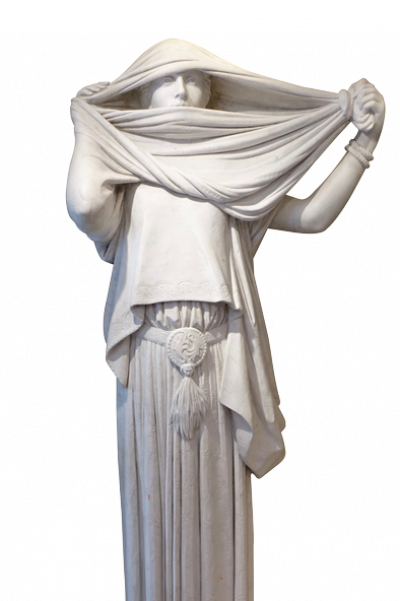 The Woman with Veil After Jean Louis Gerome Circa 1890-1900
Important direct carved statue in Carrara marble depicting a woman veiled in an antique style resting on a circular terrace signed J.L. Gérome at the back, on the terrace
An outstanding artist and student of Delaroche, in 1847 he presented a work of striking virtuosity and realism, “Le combat de coqs”.

Quite quickly he abandoned “great painting” to illustrate himself in various themes, including antiquity and Orientalism.
At the end of his life around 1878, the transition to the 3rd dimension and sculpture testifies to his obsession with tactile and visual illusion. He even tried the chryselephantine technique, including a “woman with a veil from 1890, cast by Siot-Deauville.
Good condition, some chips and splintering in the base