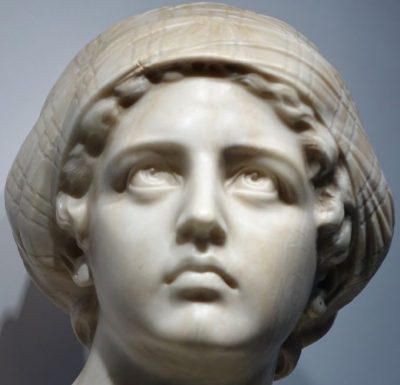 Alabaster bust of a Turbaned woman, noted “Giuditta” on the base, signed on the back G.BESSI.
Guiseppe BESSI ( 1857-1922), Italian sculptor famous for his busts of biblical and historical characters and figures ( L. van Beethoven, Jeanne d’Archal muse Beatrice de Dante Alighieri). He used mainly marble and alabaster, combining neo-classicism and Art Nouveau.
Born in Volterra in 1857, he studied at the Academy of Fine Arts in Florence before returning to his native city to establish his own workshop.
He exhibited in Turin, in Saint-Louis in the USA, then at the Universal Exhibition in Paris.
Museums: Hermitage, Volterra.
Judith is the name of two biblical characters appearing in the Old Testament. In Hebrew, her first name would mean “praised”. The first Judith appears in the book of Genesis; the second Judith appears in the biblical book “Book of Judith”, which is part of the Deuterocanonical Books.