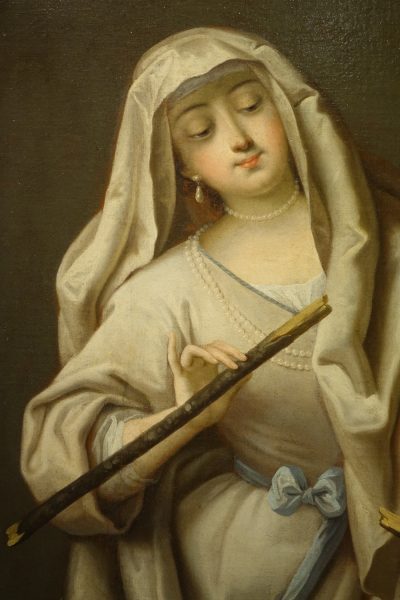 Young Vestal reviving the sacred fire.Oil on canvas, French school of the 1st half of the 18th crntury.

Follower of Jean RAOUX 1677-1734.
In ancient Rome, the Vestals or Vestal Virgins were priestesses of Vesta, goddess of the home. The college of the Vestals and its property were considered fundamental for the continuity and security of Rome.
They cultivated the sacred fire that was not allowed to be extinguished. The vestals were freed from the usual social obligations to marry and bear children, and took a vow of chastity in order to devote themselves to the study and corresponding observation of state rituals that were forbidden to male colleges of priests.
A popular subject at the end of the 17th century, and at the beginning of the 18th century, when women of good condition were represented as Vestal or repentant Magdalene.
Good condition, re-decorated, with a painted 19th century wooden frame.