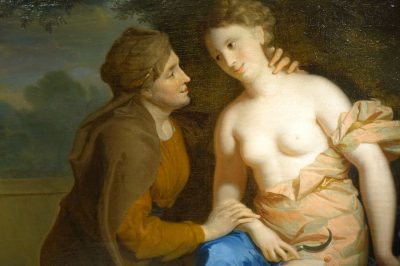 Oil on canvas representing Vertumne et Pomone ,goddess of fruits.
Pomona is a nymph of great beauty who watches over the fruits and gardens. Vertumne, god of orchards and wine, watches over the transformations of nature over the seasons. He succeeded in seducing Pomona by taking on various appearances, even that of an old woman. The latter shows her a vine shoot as she approaches her very close, the starting point of a speech on love that she listens to without mistrust ( Ovid ,Metamorphoses XIV,622-771).
Attributed to François-Alexandre VERDIER; 1651-1730.
Verdier was one of the three main students of Le Brun, thanks to whom he was received at the Royal Academy of Painting and Sculpture in 1678. From 1688 onwards, the King ordered easel paintings for the Grand Trianon. Prix de Rome in drawings in 1668 and 1671.
Very good condition. Back frame . Original canvas and frame.
90×79 cm