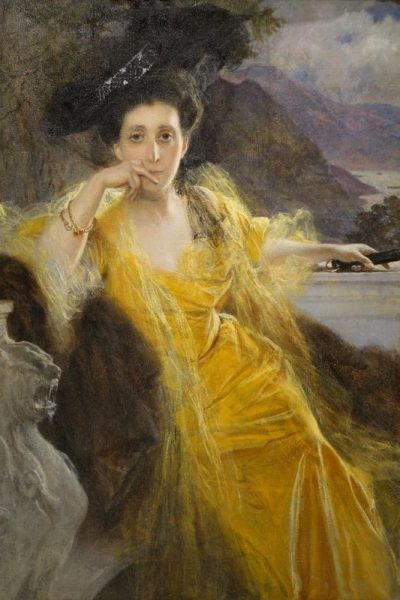 Portrait of Marie-Louise ACHILLE-FOULD, born HEINE.
Oil on canvas, signed and dated ” François Flameng ,1903″. Provenance: castle Beychevelle, classified grand cru of Saint-Julien, in the Bordeaux region.
From a family of German bankers with historical links to the Fould bank, Marie-Louise Heine married in 1890 the politician Achille Fould.
This exceptional woman put her fortune at the service of the sick and then the wounded of the Great War.
Francois FLAMENG (Paris 1856-1923). Student of Cabanel, Hédouin and JP Laurens at the Beaux-Arts School. At the Salon from 1875, he was the friend of Sargent and Helleu.
Appreciated by Tsar Alexander III, he was invited in 1894 to Russia, where he painted many portraits of aristocrats and members of the Imperial family.
With Constant, Gervex, Maignan and Merson, he decorated the new Salle Favart, destroyed in 1887. He is the author of the panel “Paris” for the great hall of the Blue Train, the restaurant of the Gare de Lyon.
He taught at the Beaux-Arts from 1905, and became an Army painter in 1914.
Museums: Ottawa, Chicago, Manchester, San Francisco, Washington, Beaune, Bordeaux, Marseille, Paris (Orsay, Petit Palais, Sorbonne, National Assembly, etc.), Rouen, Rennes, London, Moscow, etc….