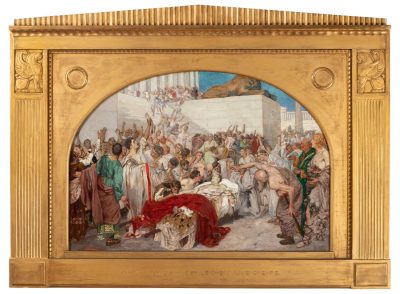 Mark Antony’s Funeral Oration over the Corpse of Caesar.”. Oil on canvas signed Robert Seuffert, dated 1906 lower left. Caius Julius Caesar was assassinated on the 15th of March 44 B.C., day of the ides of March, in Pompey’s Curia. This act was supposed to restore the Republic. Instead, it contributed to the establishment of the Empire. The scene shows the consul Mark Antony presenting the remains of his dead friend to a crowd that was aroused by his pathetic eloquence. It is thought that he is holding Caesar’s will in his hand, which will not be revealed to the people until 20 March, five days later. Original canvas. Very beautiful frame in the shape of a temple with fluted columns supporting winged lions. Robert Seuffert is a painter of the German school, born in Cologne on March 28th 1874. Pupil of Gebhardt and P.Janssen. He painted numerous decorations for theaters, as well as altar paintings.