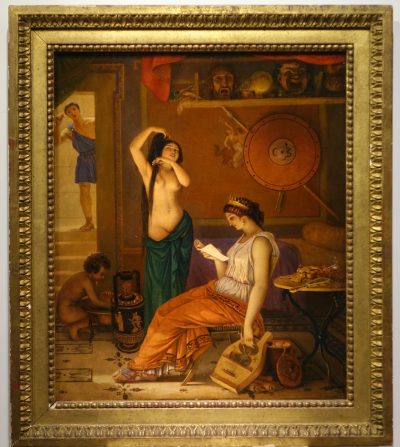 Oil on canvas representing actors in the backstage of a theater, in ancient Greece.
Work on its original canvas, attributed to Jean-Jules-Antoine Lecomte du Nouÿ (1842-1923), circa 1890.
A student of Gleyre, Signol, then Jean_léon Gérome, he made his debut at the 1863 Salon with “Francesca da Rimini et Paolo”.
He made his first trip to the Orient in 1865. In 1872, he was awarded the 2nd Prize of Rome and was commissioned by the State to paint two compositions for the Church of the Trinity, as well as to purchase various works for museums.
1875: Greece and Turkey, then Egypt, Romania and Morocco.
Perfect condition, on its original canvas, beautiful gilt wood frame