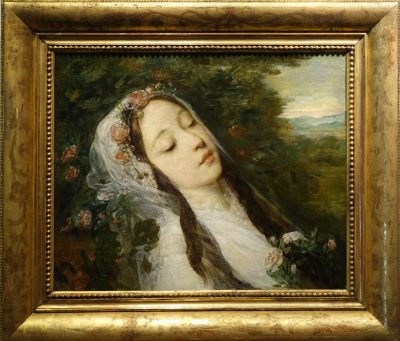 Ophelia, daughter of Polonius and sister of Laërte, sinks into madness and dies, by accident or suicide, when Hamlet, her lover who has abandoned her, murders her father. Ophelia has been a source of inspiration for composers such as Berlioz and Saint-Saëns, painters (cf. John Everett MILLAIS’ masterpiece), writers and poets (including Arthur Rimbaud). Pupil at the school of Fine Arts of Marseille, where he was born in 1823, directed by Auguste Aubert, he became the pupil of Pierre Bronzet, who taught him the art of portrait painting. He entered the Beaux-Arts de Paris in 1843 in the workshop of Leon Cogniet. He travelled frequently to Italy, Holland, Germany and England, and returned to Paris in 1850, the year in which he presented several works at the Salon and received a 2nd class medal. He concentrated his talent on the restitution of the lights or the radiance of a human face. First class medal in 1853, Universal Exhibition in 1855. Paul de Musset noted that he had a natural disposition to mysticism, and he executed figures of fancy and of study, some still lifes, and some mythological and allegorical compositions. He died in Paris in 1873. Museums: Grenoble, Paris