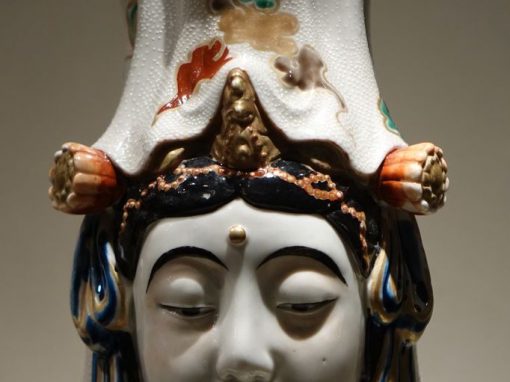 A huge statue of Kannon, considered as the goddess of Mercy, Kannon is the Bodhhisattva associated with the concept of Compassion in East Asian Buddhism.Represented in a female figure in China and Japan, and elevated to the rank of divinity, she is considered one of the most important Boddhisattva of Indian Buddhism. Kannon has obtained enlightenment, but not immediately wanting to attain the rank of Buddha, she stops along the way in order to make men benefit from his teaching. Kutani-yaki style, produced in Ishikawa prefecture (Kaga province), during the Meiji era (1868-1912) An inscription below with last name and location. Reparation on the left hand holding the scroll.