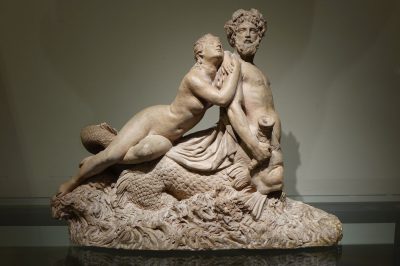 Marine centaur and nymph, original terracotta depicting a marine centaur removing a nymph (Eurytion and Hippodamia?) The ichthyo centaure, also called centaur-triton, or marine centaur, with a body of fish, and paws of a horse (sea horse pulling the chariot of Poseidon), belongs to the family of Centaurs who lived on Mount Pelion, but were chased to Mount Pholus by the Lapiths. French work around 1770, which can however be compared to the “Nessus Removing Déjanire” of Joseph Chinard, Lyon), but especially works of Johan Tobias Sergel (1740-1814), “Centaur embracing a Bacchante”, among others , that we could see at the exhibition “The Creative Spirit, from Pigalle to Canova” in the Louvre in 2003. This sculptor realized a lot of terracottas during his stay Roman, which were discovered in the coll. Cronstedt, circa 1910. Condition: missing part of the tail and forelegs, as well as the left forearm.