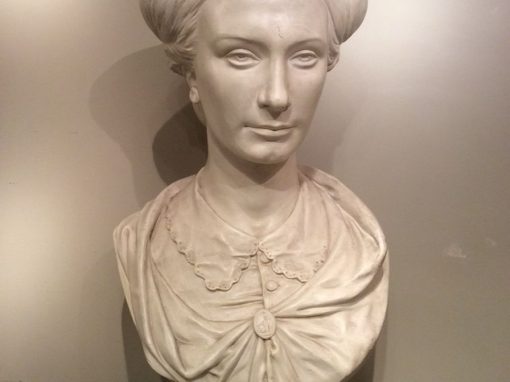 Portrait in bust of a young woman wearing a Greek comb. This is a plaster signed Dantan the younger and dated 1867. Jean Pierre DANTAN, known as a young Dantan, French sculptor (1800-1869); brother of the sculptor A.L. Dantan. He was trained at the Beaux-Arts from 1823, and was a student of F.J. Bosio. He made many small busts from 20 to 60 cms , edited in plaster or bronze, which he sold in a Hall of the Passage des Panoramas called “Dantan Museum”. Works at Père-Lachaise; portraits of celebrities from politics, the arts (Beethoven, Paganini, Verdi, Victor Hugo, Balzac) in many museums, including Carnavalet in Paris, Rouen,Dijon, Atlanta. library. -Dantan Museum, Paris, H. Delloye, 1839. -P. Sorel “Les Dantan du musée Carnavalet”, 1986 -“the 19th century”, ed. 2009 Very slight accident on the rear base of the base; a whitewash was previously applied to the surface, probably to give the appearance of marble.