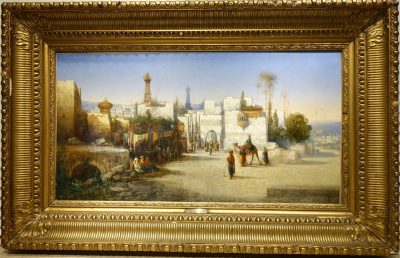 Oil on canvas representing a view of Cairo, probably of the outskirts, with one of the Gates that allowed entry into the city. One instantly thinks of the street Al Moez Ldin Allah Al Fatmi behind the Bal Al-Futûh gate, one of the three remaining gates of the Fatimid or Ayyubid walls (10th-12th c.), but the architecture does not correspond. The view may correspond to the Bab Al-Barqiyya gate, but it was in very poor condition at the time the painting was made. We are indeed in Egypt, with the alternation of bricks and stones that can be seen in the minaret on the left.
We can also be in the presence of a reconstitution on the canvas of different sketches taken on the spot by the artist, or by colleagues, giving a heterogeneous composition, helped by the romantic and idealized vision that we had of the East at the time.
Signed in lower right A.Visconti. Probably Angelo Visconti (1829-1861).
A student at the Academy of Siena, following the teachings of Mussini, he went to Rome in 1858. The Uffizi in Florence preserve drawings by him, and the Cassioli Museum in Asciano preserves the “Massacre of the Innocents”, and the “Levite Captive”.
The frame (130×82) is currently being restored.