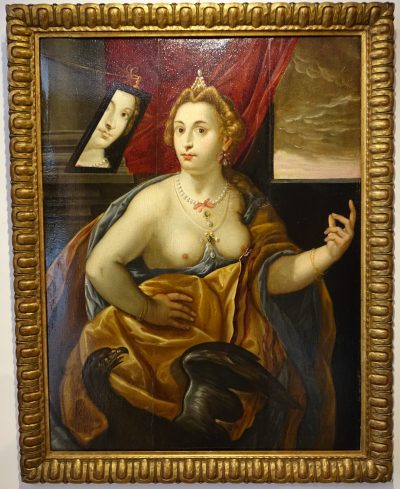 A painting representing a women in front of a mirror that reflects her image.
Is it the allegory of the sense of  sight ?
The five senses have often been personified by women who have been presented with different attributes to recognize them. These representations appeared mainly from the 16th century, although there are examples from the early Middle Ages.
The presence of the eagle in what is believed to be the allegory of sight, can make us think of a symbolic of beauty, strength, prestige, and pride.
This explanation is not to be disregarded, as well as that of the portrait of a courtisan, in both cases.
Usual restorations (right arm of the sense)
Distortions of the panels despite the presence of reinforcements and fabric bands at the back.
Renaissance style godron frames.