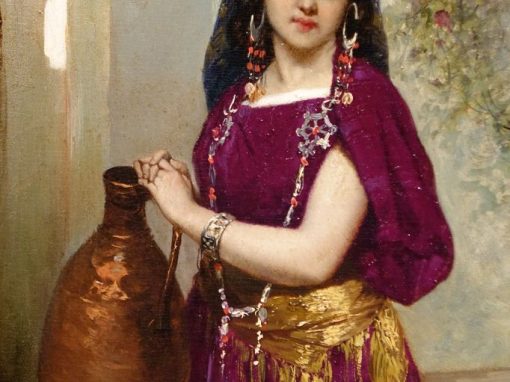 Oil on mahogany panel representing a richly dressed girl coming to fetch water from a fountain, probably in Algeria, with the use of two copper jars. Signed lower right “BEYLE” Pierre -Marie BEYLE (Lyon 1837- Chennevières 1902). Painter illustrator French ,he is known as a painter of scenes of everyday life. Based in Paris, he began at the 1867 Salon with “a Bohemian woman”, then exhibited episodes of the life of the fairground artists, then some of the figures he had taken in Algeria in 1877-1878. Museums: London,Melbourne,Rochefort,Valence. cf. Bénezit,T.II,p.8; G.Schurr,T.I,p.64