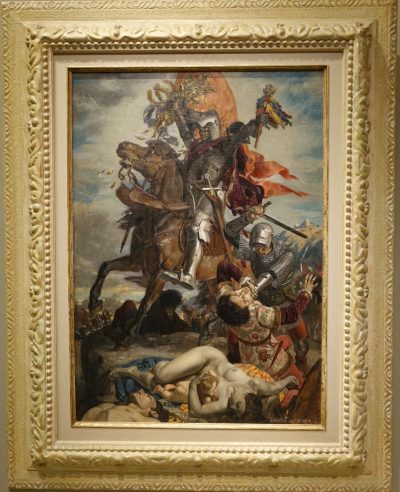 Oil on canvas representing a scene of massacre (during the Hundred Years War?), with the center of a skeleton dressed in armor, riding a steed, and brandishing trophies.
One thinks of the triumph of death. The title of “Ghost of Glory”, or “Massacre of the Innocents” had also been given for this painting.
Signed lower right A.Leroux. We have the date of 1938 for an engraving made by Omer Bouchery, which allows us to date the painting.
André Leroux was first a student of his father Auguste. He was awarded first place in the Concours des Beaux Arts in 1929, where he became a student of Jean Pierre Laurens and Louis Roger.  He obtained the Legay-Lebrun prize of the Institute of France and the great gold medal. A painter of figures and history, his classicism and romanticism set him apart from the rest of his era. He exhibited almost every year at the Salon des Artistes Français.
73×91 with frame