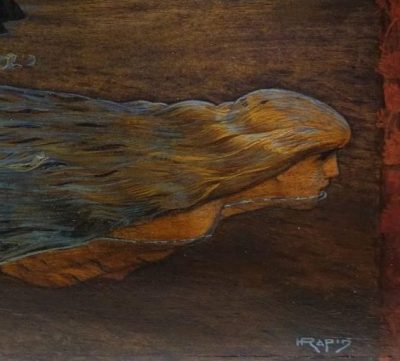 “Circe guiding the ships of Ulysses to the kingdom of the Dead?”.
Oil on panel, signed HRAPIN below.
Henri RAPIN, born in 1873 in Paris, and died in 1939, is a painter of the French school, illustrator, and decorator.
Student of Gérome and Grasset, he was close to Bellery-Desfontaines, and gradually moved to the decorative arts, designing art nouveau furniture, then from 1910 art deco.
He was artistic director of the trunk-maker Moynat from 1905 to 1930, decorative arts, then artistic advisor to the Manufacture nationale de Sêvres.
Works in the cathedral of Besançon, in the Town hall of the 15th in Paris, in the church Saint-Martin d’Hénin-Beaumont, in the international exhibition of decorative and industrial modern arts in 1925, and in the residence of the Imperial Prince Asaka in Tokyo (completed in 1933) where he designed seven rooms.
This work is to be associated with the symbolist movement, which often represents the sacred, fatal, or magical women, in mysterious or imaginary settings.