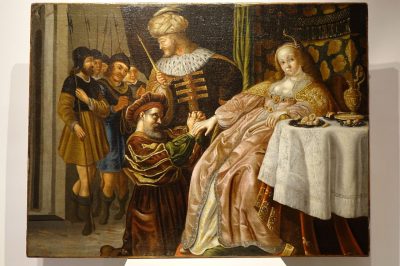 Uncommon scene de genre depicting “Haman imploring clemency from Esther”, from the Book of Esther.
Haman, prime minister of King Assuerus, has just seen his plot against the Jews of the kingdom unmasked by Queen Esther and implores her to forgive him. Esther will not let herself be weakened (she turns her head away) and we see in the background Assuerus (crowned with a turban, like any oriental Potentate) ordering his soldiers to arrest the traitor (one of them is already holding the ropes that will be used to bind him). Haman will finally be executed.
Flanders, 2nd half of the 17th c. 90×67 unframed
old restorations