A Royal Procession , Paul HANNAUX circa 1930 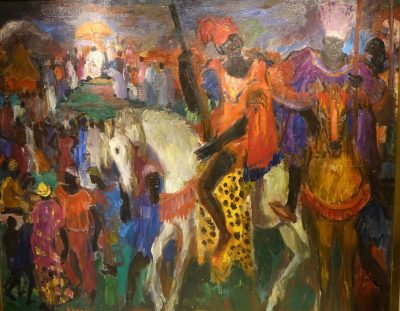 ” A Royal procession in Africa”,oil on canvas signed Hannaux, circa 1930.
Paul HANNAUX, painter of landscapes, portraits and compositions, French illustrator and decorator( 1897-1954)
Son of the sculptor Emmanuel Hannaux, he was a pupil of Ernest Laurent at the Beaux-Arts de Paris. He was influenced by the post-impressionist painter Georges Dufrenoy.
He was awarded the Prix de Rome in 1924 and received a travel grant the same year for Spain, where he was a boarder at the Casa Velasquez in Madrid in 1929.
He was a member of the Salon d’Automne and was also a member of the Salon des Tuileries. He took part in the decoration of the Paris Pavilion at the 1937 Exhibition.
He illustrated Baudelaire, Stendhal, and the Prometheus of Aeschylus, and was decorated with the Legion of Honour.
He travelled to Spain, Portugal, Italy, the Netherlands, Greece, North Africa and Brazil. Inspired by the landscapes and colourful populations of southern Europe, he expressed them in his works, which were largely and intensely worked.
We can feel here his travels in Africa and South America by the wide chromatic palette he uses.
Museums: Algiers, The Hague, Paris (Petit Palais ), Madrid, Metz, Oran, Bayonne, Constantine, Cologne, Rio, Salzburg ….